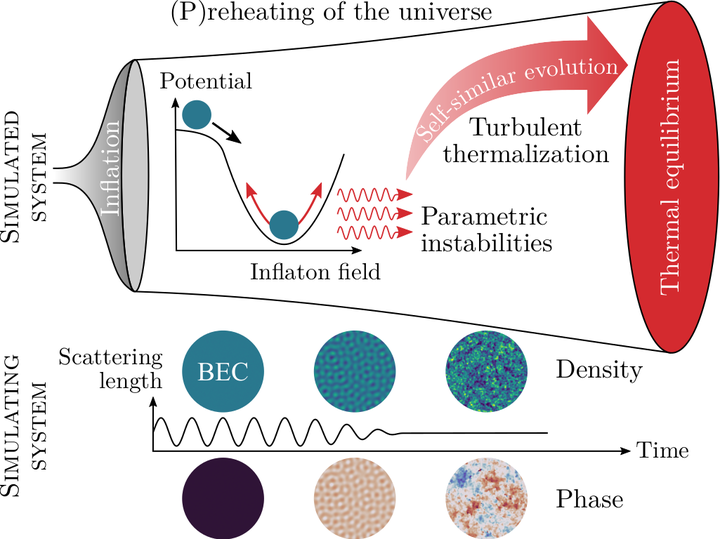 Cosmological reheating describes the transition of the post-inflationary universe to a hot and thermal state. In order to shed light on the underlying dynamics of this process, we propose to quantum-simulate the reheating-like dynamics of a generic cosmological single-field model in an ultracold Bose gas. In our setup, the excitations on top of an atomic Bose–Einstein condensate play the role of the particles produced by the decaying inflaton field after inflation. Expanding spacetime as well as the background oscillating inflaton field are mimicked in the non-relativistic limit by a time dependence of the atomic interactions, which can be tuned experimentally via Feshbach resonances. As we illustrate by means of classical-statistical simulations for the case of two spatial dimensions, the dynamics of the atomic system exhibits the characteristic stages of far-from-equilibrium reheating, including the amplification of fluctuations via parametric instabilities and the subsequent turbulent transport of energy towards higher momenta. The transport is governed by a non-thermal fixed point showing universal self-similar time evolution as well as a transient regime of prescaling with time-dependent scaling exponents. While the classical-statistical simulations can capture only the earlier stages of the dynamics for weak couplings, the proposed experiment has the potential of exploring the evolution up to late times even beyond the weak coupling regime.

The video below illustrates our proposal for quantum-simulating post-inflationary (p)reheating dynamics in an ultracold Bose gas. The initial state is a pure Bose–Einstein condensate that plays the role of the inflaton field after cosmic inflation. As the coupling is modulated periodically, the occupancies of resonant momentum modes grow exponentially — in analogy to the explosive particle production through the decaying inflaton field in the early universe. This linear stage of preheating can clearly be seen in the video as the emergence of a regular pattern in both the density and the phase. As occupancies grow more and more, non-linear effects kick in, breaking up the regular pattern and leading to a chaotic, turbulent state. In this stage, energy is transported to smaller and smaller length scales in a self-similar way. After a long time, the system will eventually relax to thermal equilibrium (not in the video), completing the reheating process.

While this video can only give a qualitative impression of the (p)reheating dynamics, check out our paper for a quantitative analysis.

The video is not playing? Play it in a new tab.
Analog cosmology Far-from-equilibrium quantum dynamics Thermalization